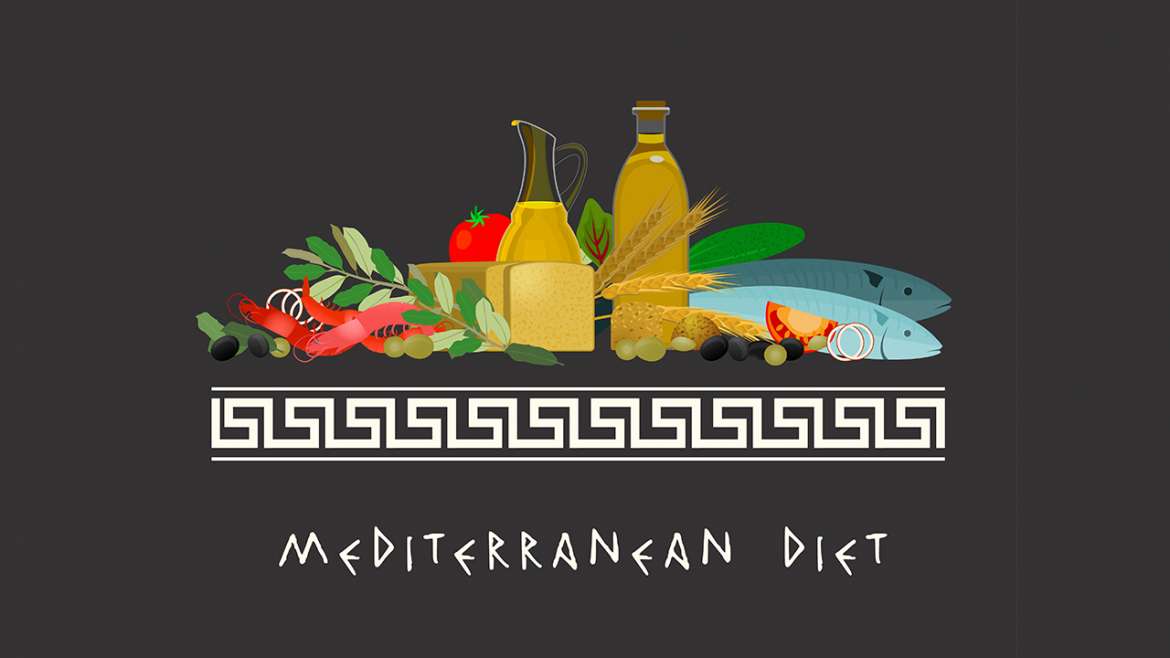 Where does the Mediterranean diet come from?

As the name suggests, the diet originates from different regions around the Mediterranean Sea, mostly Greece, Italy, Spain. Since this is quite a large area and because there is no official definition, it’s actually more of an eating concept instead of a specific diet.
Also, the diet actually mirrors older eating habits from the 1950s and 60s, so even though you will still find a lot of aspects from the traditional Mediterranean diet in these countries, current eating habits have also adopted more “modern” foods.
But why is the Mediterranean diet so famous and what does it actually consist of?

What Is The Mediterranean Diet?

The Mediterranean diet emphasizes eating primarily plant-based foods, such as fruits and vegetables, whole grains, legumes and nuts. Red meat is consumed only a few times a month and instead fish and poultry are eaten more often, at least twice a week.
It also includes high amounts of unsaturated fats like olive oil and canola oil, which usually replace butter. Besides bread there are practically no processed foods found in the Mediterranean diet, same with candy or other high sugar items.
The diet initially gained some notability after the famous Seven Country Study. The Seven Countries Study was a collective effort of several international researchers to answer questions about heart and vascular diseases among countries. The seven countries included were the U.S. Finland, the Netherlands, Yugoslavia, Greece, Italy and Japan.
The study showed that people in Greece and southern Italy had lower rates of cardiovascular disease, which was thought to be because of their unique diet. While the findings did create some interest in the 60s and 70s, the Mediterranean diet only began to become famous in 1990s.
At that point different studies had confirmed the lower rate of cardiovascular disease and higher longevity. Keep in mind that the 1990s were also the time of the low fat craze so many people were confused how a high-fat diet like the Mediterranean diet could be so healthy.

The Benefits Of The Mediterranean Diet

Now that you know where the diet comes from, let’s talk about its pros and cons. There are quite a few benefits, but it isn’t perfect either.
Healthy fats:
A vital part of The Mediterranean diet is its high olive oil intake. As a monounsaturated fat, olive oil is extremely healthy even in high amounts. It will generally be a lot better for your heart and arteries unlike high amounts of saturated and trans fats, which are often overeaten in the U.S. and Northern Europe. The diet also features quite a bit of fatty fish and seafood, which also come with essential fatty acids.
High vitamin and mineral content:
Another aspect is the high amount of fruits and vegetables, which the diet provides. Both come packed with vitamins and minerals, which improve immunity and overall health.
Fiber:
Eating plenty of Fruits and vegetables along with whole grains will also lead to a higher fiber intake, which promotes healthy digestion and can help with diabetes. Nowadays, most processed foods have little to no fiber, which is why most people don’t get enough of it.
Low sugar:
The diet also favors natural- over added sugar, for example, from fresh fruits. Added sugar increases calories without adding nutrients and is linked to weight gain and diabetes.

The Drawbacks Of The Mediterranean Diet

So much for the benefits of the Mediterranean diet. At this point it will probably seem like a pretty good diet, which it actually is. But t’s not right for everyone and there are disadvantages. Here is what I mean:
Low protein:
If you are into fitness, chances are you want to build muscle, for which you need a fairly high protein intake. In theory the Mediterranean diet does include some quality protein sources like poultry and fish, but they are eaten in moderation and a high protein intake is generally not a priority in the diet.
That’s why switching from a high protein diet to the Mediterranean diet would most certainly lead to a less than ideal protein intake and potentially muscle loss.
No calorie control:
Many people believe the Mediterranean diet is a weight loss diet, which it is not. While favoring whole foods instead of processed foods is one important step towards weight loss, the high intake of fat can become problematic.
Not because monounsaturated fats are unhealthy, but because they are so calorie dense. For example, if you have ever been to Greece you know they put olive oil on everything – and I mean EVERYTHING.
One tablespoon of olive oil has around 120 calories and you will usually have multiple tablespoons in a Greek salad. This makes it very difficult to watch your total calories unless you actively monitor your fat intake.
Lifestyle factors:
The initial studies that made the Mediterranean diet famous looked at general populations, their eating habits and their disease rates.
Eating habits were believed to be the reason for lower rates of heart disease and diabetes in southern Italy and Greece, but of course there are always multiple reasons involved. You have to keep in mind that lifestyle choices will also always play a huge role.
Life in southern Italy and Greece in the 1960s was a lot quieter than it is for most people nowadays. People were also more physically active and worked mostly outdoors. This translates to lower stress levels and better general health, even if you take the diet out of the equation.
You want to keep this in mind when thinking about adopting a cultural diet. You will not get the same results unless you copy everything else, too.

What’s the bottom line on the Mediterranean diet?

It’s definitely better than the standard western diet, which consists of mostly processed sugary foods and is high in saturated fats. So if your current eating habits are like most Americans then switching to a Mediterranean style of eating would benefit you.
Favoring unsaturated fats and limiting junk food is always a good idea and only has advantages to it. This also includes getting more fiber, which helps reduce hunger and promotes healthy digestion.
But if you already follow a fairly balanced diet set up and maybe also want to build some muscle or lose fat it’s a lot more important to watch your overall calories and protein intake, both of which will be difficult on the Mediterranean diet.
You should still include fruits, vegetables and whole grains in your diet, of course. But you don’t need to increase your fat intake or add olive oil to every salad you eat.