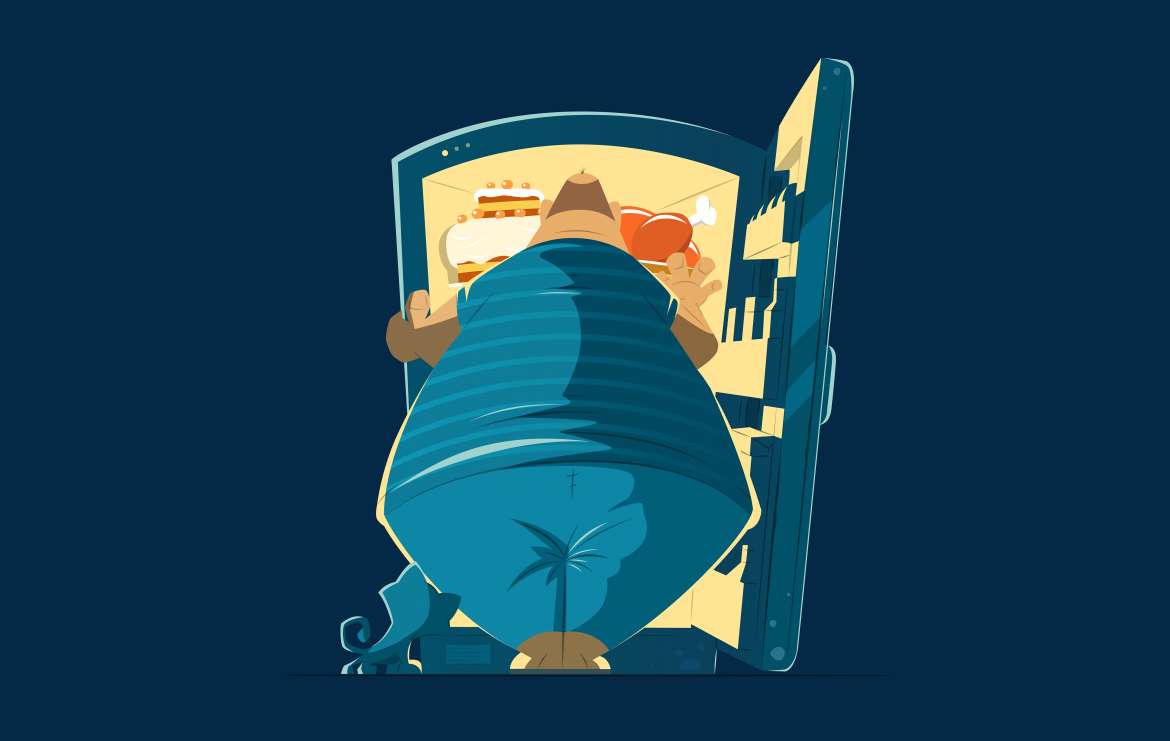 Diet & Nutrition Weight Loss
For many years it was common knowledge that you shouldn’t eat anything, especially carbs right before going to bed and that your last meal should be at around 6 p.m.
The argument was that because you don’t really do anything while you are asleep, your metabolic rate would slow down so eating anything right before bed will translate to more fat storage.
But in recent years this notion has been challenged and so today many people are confused if eating before bed is really a problem for fat loss.
As you will see in a second the science on this is actually pretty straightforward and I will also give you some practical recommendations as to when you should eat for optimal weight loss.
The first thing we should look at is the general research on late eating and weight gain. The truth is that there are several studies showing that people who eat before bed are more likely to gain weight.
So, does that mean late eating really causes weight gain?
No, the studies looked only at correlations but not causation. This means that while more people who eat or snack at night might gain weight, it’s not the underlying cause. In fact, the reason is much simpler.
People who eat before bed are more likely to be obese simply because a bedtime snack is an additional meal which in turn translates to more total calories. You also need to keep in mind that most people are hungriest later in the day, which makes it more likely that they will overeat.
Late eating isn’t bad per say, and I will tell you why in a second, but for some people it can become problematic because they get stuck in a cycle where they eat too much at night, skip breakfast the next morning because they are too full, but then again feel extremely hungry the next evening and overeat again.
This cycle often leads to weight gain, simply because you go over your total daily calories because of the large late meal. So it’s not the timing of the meal, but rather its size. That means the problem with eating at night is not your slow metabolism but the unhealthy habits that often come with late snacking.
But why isn’t your metabolism to be blamed?
Weight loss ultimately comes down to a proper calorie deficit, which means you need to take in fewer calories than your body burns on a regular basis.
Most people already know this, but they think that there are is also an “on-off” switch for fat loss, so that you either have fat gaining days or fat burning days. That kind of misses the point, though. Over the course of a day your body will store and burn fat multiple times and what counts is the result of all the fat storing processes minus all of the fat burning processes.
Your body needs a certain amount of energy to maintain your current weight. It pretty much doesn’t care if it gets most of this energy in the morning through a large breakfast or at night through a large dinner. In the case of the large breakfast, your body would store more fat earlier in the day and burn more later, while in the case of the large dinner it would store more fat later in the day and burn more earlier.
To show what I mean let’s assume the most extreme case in which you ate all your daily calorie right before going to sleep. Would this change anything?
Not really.
Even though your body would store more fat right after your meal, because you don’t need the energy during your sleep, you would burn this fat again in the morning and during the next day when you are active again.
So, even in the most extreme case, you wouldn’t gain weight unless you also created a calorie surplus, which means that you eat more calories than your body needs.
Why late eating can still be a problem for many people
That said, late eating isn’t ideal for many people, because as I said earlier it’s more difficult to control your calorie intake when you are eating chips on the couch while watching TV.
Also, some people will feel bloated after a big meal, which keeps them from falling asleep. If this is you, then of course eating a bit earlier makes sense for both weight loss and overall health.
But the bottom line on eating before bed is that meal timing doesn’t matter nearly as much as most people think.
Most important are always your total calories. If you want to lose weight make sure you create a calorie deficit. Not through crash dieting, but through a smart meal plan that will make sure you stay healthy and energized throughout the day.
Once you have that set up, you can eat pretty much whenever you like. Of, course there are things like pre- and post-workout meals, but leaving these aside you shouldn’t worry too much about meal timing.
As long as your overall diet follows a calorie deficit and gets you all the nutrients your body needs eating right before bed is NOT going to magically make you gain fat.