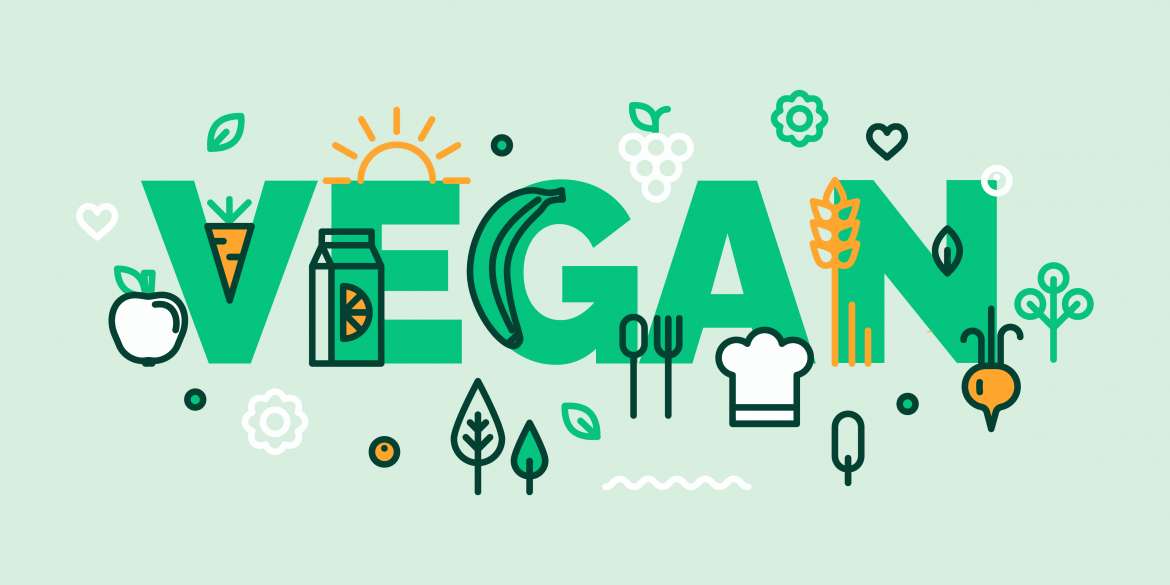 Diet & Nutrition Healthy Living
Vegan diets are everywhere. Not only do you hear about them on the news and on TV but also from your friends and family. Unfortunately, with this free information comes a lot of misinformation.
So while many people talk about veganism, few actually know what it’s all about and can give you an unbiased view of the pros and cons of a vegan diet.
That’s why in this post I want to talk about some of the most common myths you will hear regarding vegan diets, both from opponents and advocates of vegan diets.
As you will see, even though many worries and fears of becoming deficient or even malnourished on a vegan diet are not true, this is also the case for some positive claims about veganism, for example that it will automatically and always make you more healthy.
I believe that when you want to set up a vegan diet, you have to be able to look past the hype, both positive and negative, to make sure you really know what you are doing.  So to give you a more balanced picture let’s start clearing up the following rumors and myths.

People who believe this myth usually refer to the higher frequency of certain deficiencies among vegans like B12 or calcium deficiencies. Now even though it is true that you are more likely to develop such deficiency when you cut out meat and dairy products from your diet, they are easily avoided by proper supplementation.
Another argument against vegan diets that you will hear a lot is that plant protein lacks certain essential amino acids and will therefore lead to protein deficiency and muscle loss. I will talk about this in a second.
For now, what you have to keep in mind is that any diet that restricts certain foods can lead to deficiencies if you don’t plan for them. As an example, extremely low-fat diets, which were very popular in the 90s often brought peoples fat intake to such low levels that hormone production was affected.
Obviously, this is extremely bad for your health. So what’s most important is that you inform yourself, set up a balanced diet and know which possible deficiencies could occur and that you plan for them instead of mindlessly eliminating certain foods from your diet.

You will usually hear this from die-hard vegans that treat dieting like a religion. To debunk this myth we have to look at the data.
At first is does seem like vegan diets are more healthy than normal diets. On average vegans have lower heart disease and cancer and generally report to feel healthier.
This, of course, is a good thing and many people go vegan exactly because they want to improve their diet, which is always a good motivation. What you have to keep in mind though is that there are certain factors that usually aren’t accounted for in the studies.
For example, on average vegans smoke less than meat eaters and they also consume fewer calories. Many also report lower stress levels, which might be connected to their diet, but it’s more likely that this is a lifestyle thing.
When comparing two diets, you have to make sure to rule out these factors to not screw up the results.
Once you control for calorie intake, smoking and other lifestyle factors, the results are almost identical. Both vegans who follow a balanced diet and meat eaters who follow a balanced diet have lower risks than the general population of heart problems, cancer and other diseases.
So, what I’m saying is that yes a vegan diet is most likely healthier than the average western diet, which consists of mostly processed high sugar foods. But if you compare it to a healthy diet that also includes quality lean meat the difference becomes almost nonexistent.
This is not necessarily an argument against vegan diets of course, but simply for healthy eating in general.

The next myth we have to talk about is that vegan diets lead to protein deficiencies. Proteins are molecules that are comprised of building blocks called amino acids.
When we eat proteins, they are broken down into different amino acids some of which the body cannot produce so we have to get them from our food. These amino acids are called essential amino acids.
The problem is that unlike animal proteins which always contain a fairly high amount of essential amino acids, plant proteins are sometimes low in one or more of the nine essential amino acids.
This is why plant proteins are often said to have an inferior amino acid profile.
This fact has many people believe that vegan diets will always lead to amino acid deficiency. And since our body needs amino acids for muscle growth and tissue repair they think this will be a health problem in the long run.
Now, in theory, this could true. If you only ate a very limited number of vegan foods and did not balance your diet you could run into these problems.
But your diet will combine different plant-based protein forms like beans and rice, legumes, nuts and seeds and the low amount of amino acids in one food will be balanced out by another and you get all your essential amino acids either way.
Also, the amount of essential amino acids we actually need in our diet is a lot lower than many people think. As long as your diet consists of sufficient calories and not just one type of food it will most certainly include adequate amounts of essential amino acids.
Therefore protein deficiency doesn’t have to be a problem for vegans. They should still watch their intake closely when wanting to build muscle because this requires more overall protein, but I talk about this in a different video.

A similar myth to the protein deficiency myth is that vegans are always weak and tired. This was long believed because meat is one of the best sources of iron and vitamin B12, which are both essential nutrients for general health, high energy levels and preventing anemia.
But just like in the case of protein, cutting meat from your diet doesn’t automatically make you iron or B12 deficient so long as you include healthy alternatives in your diet.
In the case of iron you can use beans and dark leafy veggies like spinach as alternatives, and make sure you combine them with foods high in vitamin C like tomatoes of peppers, which help absorb iron.
Vitamin B 12 is more difficult to get from only plant-based foods. even though there are fortified cereals or things like soy milk that do contain a good amount of it I generally recommend to supplement it. A daily B12 supplement is very cheap though and won’t burn a hole in your wallet.

Vegan #5: Building muscle on a vegan diet is impossible

One more myth is that building muscle on a vegan diet is impossible or a lot more difficult than on a normal diet. This is believed because of the lower protein content in plant-based sources.
Because protein is so important for muscle growth many people advise against a vegan diet for bodybuilders. Here is my take on this. You can definitely build muscle on a vegan diet but make sure you know what you are doing.
Unlike the average person which needs around 0.4 to 0.5 grams of protein per pound of bodyweight for general health, you need a lot more as someone who wants to build muscle. The optimal range is usually double that so 0.8 to 1 gram per pound of bodyweight per day.
Getting this much protein from plant foods is possible, but it means you will have to eat quite a bit of legumes, seeds nuts and other high protein plant sources and probably also want to include a vegan protein supplement.

Before I end this post I want to talk about one more myth that is often thrown around when someone talks about vegan diets. And that is that going vegan means you will automatically lose weight.
This, of course, neglects the most important law of weight loss, which is calories in versus calories out. As long as you don’t eat fewer calories than your body burns regularly, you will not lose weight no matter what you eat.
With that being said, many vegan foods like as rice, quinoa and vegetables are fairly low in calories for their volume so you will be able to eat a lot of them without adding huge amounts of calories to our daily balance.
This is a plus when wanting to lose weight and could be used as an argument to say that this myth isn’t completely false. But keep in mind that what matters at the end of the day is how much you eat in the form of calories and not what specific foods you eat.

Whey Protein Explained: What It Does, How To Take & Side Effects