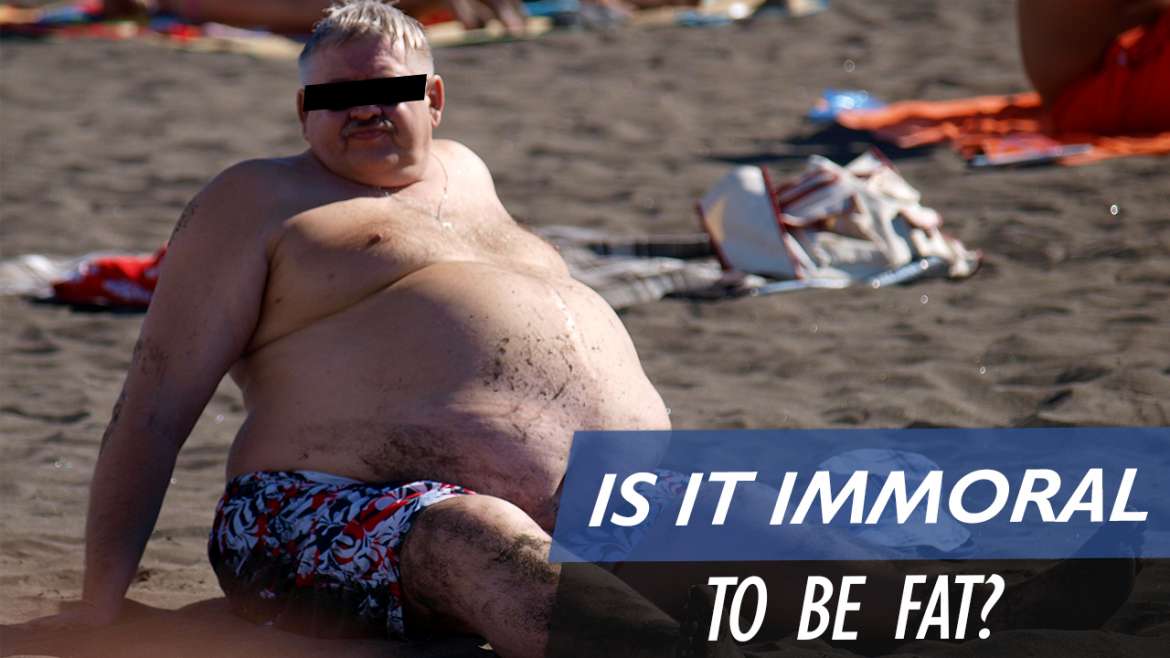 Other Weight Loss
Today I want to talk about a message I got a while ago from a student: He told me that he is overweight and often overhears others talking bad about him.
Not because of his looks or bad fitness, but because they think he is a bad person for being fat. He then wanted to know my opinion on this and asked me if I think it’s immoral to be fat.
I have to admit that I didn’t know what to answer at first. Not because I had never thought about it before but because the topic is so complex that it is difficult to summarize my thoughts in a few paragraphs.
Still, I want to try just that today. In this post I want to tell you why I don’t think being overweight makes a person bad or immoral. To understand my reasoning I think it’s important we first look at the reasons why people might consider someone who is fat to be a bad or immoral person.

Reasons Why One Might Think Being Fat Is Immoral

The first reason is that of responsibility. You could say that people don’t just have an obligation to themselves but also to others. When you are fat you set a bad example for those around you.
For example, studies have shown that children of obese parents have a much higher chance of becoming obese as well.
The problem I have with this argument is that it turns everyone into a role model even if they don’t want to be. Fulfilling this role can be difficult to impossible depending on what the standards are and who sets them.
I also don’t think being fat automatically makes you a bad parent even if your kids end up overweight, too.
Feeding your kids fast food definitely isn’t going to help them in their development but there is no reason why you can’t still be a loving and caring parent.
Of course, the same applies to parents with children in the normal weight range, who aren’t automatically “good” people.
Another argument against fat people is usually that of cost. Overweight people are more likely to suffer from all kinds of diseases and their treatment costs taxpayers more money.
Again, even though this is true, I don’t think it’s a strong enough argument to justify calling someone immoral. If social costs were an appropriate measurement of morality, anyone without a job would also qualify as a bad person; just like someone who commits suicide.
In my opinion a democratic society should allow people to do with their bodies as they see fit. That doesn’t mean we don’t have the responsibility to look after ourselves, of course.
It just means that moral judgments based on one characteristic or physical trait are misleading at best and bigoted at worst.

Does that mean being fat is completely fine?

While we as a society shouldn’t shame people into losing weight, I believe you should make a personal choice to work on yourself if you are overweight.
As a fitness coach I have seen the effects fat loss and muscle growth can have on someone’s confidence and quality of life, which is why I am convinced most fat people should try to improve their situation. But the same applies to anyone reading this, no matter your weight.
Personal growth and development are important parts of life and being productive is one of the most reliable predictors of happiness. Losing excess body fat will definitely give you a sense of achievement and progress.
But what you will soon realize is that the journey never ends. Becoming a better person is not about reaching a number on the scale of hitting your daily calorie goals. It’s about improving yourself and helping others do the same.