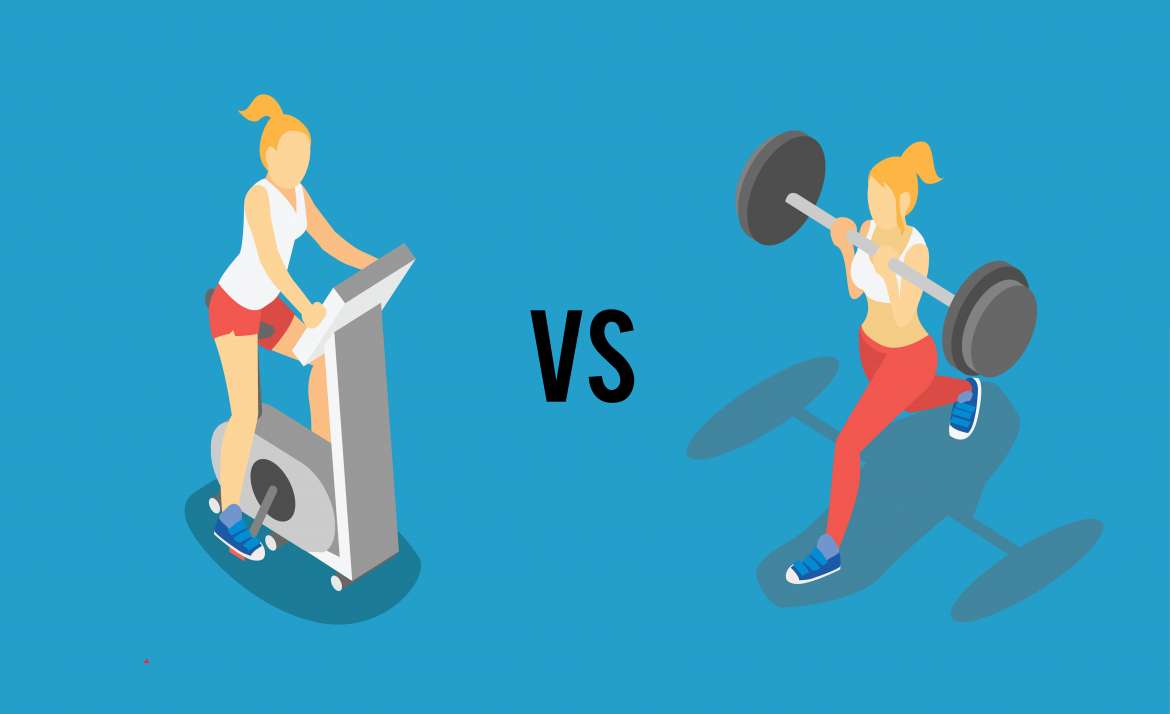 Exercise & Training Weight Loss
If you want to lose weight, one of the first questions that you will ask yourself is:
Should I do traditional cardio like jogging, or is it better to start lifting weights? Or maybe both?
Cardio and weight lifting are definitely the two most popular types of workouts, but of course, you want to know which is the better use of your time.
That’s what I will talk about in this post by going over what we know from scientific studies. At the end, I will also give you my personal opinion to share with you my own experience.

So, to start off let’s recap what most people think. The traditional view is that if you want to lose fat, you should do more cardio and that if you want to build muscle, you should hit the gym and lift weights. But this kind of misses the point.
The primary driver of weight loss is a calorie deficit, meaning you consume less energy than you regularly burn. You can reach this deficit in a number of ways and not just with cardio.
You could for example not exercise at all and simply reduce the calories you take in through your diet. Or you could weight train, which also burns calories.
So the question we should be asking is:

Let’s start with cardio. Like I said before, the average beginner wanting to lose fat will probably think about doing some form of cardio, like jogging, swimming, biking, or the like.
The problem with cardio is that depending on what you have read on the internet or in magazines, people either make cardio out to be the best invention since sliced bread or the worst thing in the world.
This not only creates a lot of confusion among beginners, but it also leaves you with no clue if you should include it in your workout or not.
First, the bad news. Not only does cardio do little to build muscle it also does less for weight loss purposes than people think. In fact, studies have shown that many people wind up even fatter than when they began their exercise routines.
How is that possible you ask?
Let me explain.
First off, cardio burns fewer calories than many people think. One hour of normal jogging burns around 400 – 600 calories depending on the intensity and your body weight. Now, this isn’t the world but it’s also not too shabby.
The problem is that many people think that they burn a lot more calorie when they get back from their jog and eat many of them right back or even overeat because they think the additional exercise allows for a lot more daily calories. For example, 400 calories can be a normal sandwich. Or only a few slices of pizza.
Of course, my point isn’t that cardio is useless for weight loss, but that you shouldn’t overestimate how many calories it actually burns. Another problem is that over time your body adapts to the exercise to reduce caloric expenditure.
This means that, as time goes on, less and less energy is needed to continue doing the same types of workouts. Basically, your body becomes more efficient. It also means that you’re no longer burning as much energy as you think you are, which increases the likelihood of overeating.
Now let’s talk about weight training. Is it better for weight loss?
Not if you look only at calorie expenditure during your workout. In fact, a normal weight lifting routine will only burn around 200 to 300 calories per session, maybe a bit more if you are taking very short breaks in between your sets. So if we only look at calories burned per one hour workout, cardio would be the winner.
Buuut, there is more.

At this point, some trainers will mention the so-called „afterburn effect“. The after burn effect, which is technically called excess post-exercise oxygen or EPOC, states how much more oxygen your body needs to return to a normal resting state after any type of exercise.
Since it has to repair your muscles, replenish your oxygen and energy reserves, it will consume more oxygen than normal right after a workout, which in turn will burn more calories, even if you are already resting on your couch and watching tv.
This sounds pretty awesome, right?
The problem is that while it exists, the afterburn effect is generally overestimated. Some people will have you believe that it’s several hundred calories worth, but that’s not true unless you exercise for a few hours at a time.
Instead, most people will jog an hour at the most which only translates to around 50 more calories burned after you stop exercising. Now, the afterburn effect of heavy weightlifting is higher than that of cardio, but it’s still too small to compensate for the fewer calories that it burns during your workout.
So the bottom line in terms of calories burned is that cardio is better than weight training.
But that doesn’t mean you should only do cardio from now on. In fact, there are pretty good arguments to limit your cardio and instead focus on weight training.

The Importance Of Body Composition

You see, your goal should not be to merely lose weight but to lose fat. To look great you actually want to gain some weight in the form of muscles and lose some weight in the form of fat.
This will pretty much only be achieved with the help of a weight training regimen (in connection with the right diet of course).  Think about the difference between sprinters and marathon runners.
Both are lean of course and have low body fat percentages, but the sprinters are a lot more muscular because their muscles are trained for short energy bursts and explosiveness, which is basically what you do when you do when you train with weights.
Marathon runners, on the other hand, do endurance training, which is what cardio is all about. Even though this can be beneficial to your heart and lungs it will not grow your muscles and get you the Hollywood look so many people desire.
And this is where I want to give you my personal opinion. From my experience, most beginners do too much cardio and not enough weight training. They grind away on the treadmill for hours and might even lose some weight.
But because they do very little to maintain their muscles through resistance training, their body will not only lose fat but also muscle, which is why many of them end up looking kind of weak and skinny.
So for the average person I recommend either a combination of weight training and short intensive cardio. This can be something like HIIT, which will burn a significant amount of calories in a short time.
Or, if you really don’t like cardio, you can also only do weight training. If you watch your diet and get a good weight training regimen, you will definitely look a lot better than if you did only cardio.
Of course, if you want to do something for your lungs and heart, a bit of cardio on the side would help. But in the end you have to figure out what you like best and what’s best for your lifestyle and schedule.

BCAAs Explained: What They Do, How To Take & Side Effects