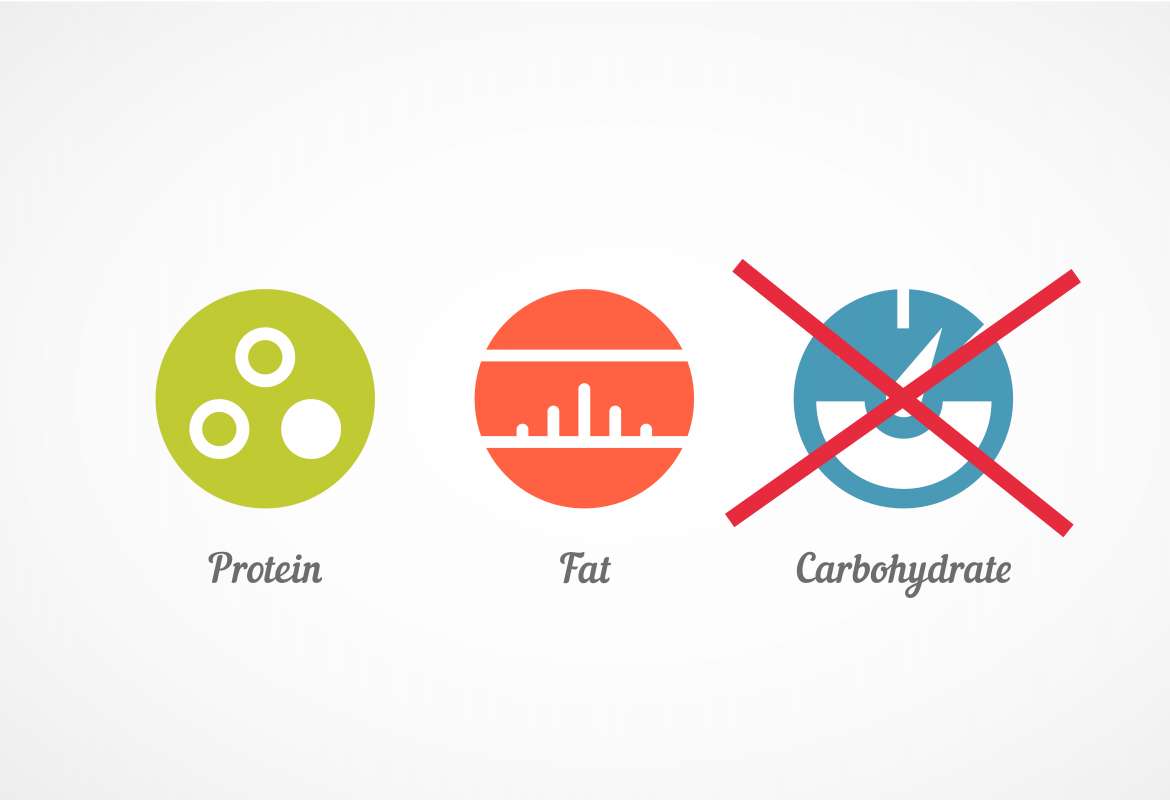 Diet & Nutrition Healthy Living Weight Loss
Next to low-fat diets, low-carb diets are among the most popular diets in the western world.
In fact, during the 90s the Atkins diet was probably the go-to diet for beginners and it claimed that you would lose up to 15 pounds in the first two weeks alone. Nowadays, Atkins is usually regarded as a fad, but that doesn’t mean low carb has disappeared.
Since so many people still follow a low carb approach in this post I want to talk about the diet in detail. You will learn what it actually means, how it works and who should follow a low carb diet.
Let’s start with the basics.

What is a low-carb diet?

As the name suggests a low-carb diet is low in carbohydrates. Carbs are one of the three main macronutrients, next to protein and fat.
In its most basic form, all carbohydrates are made up of simple sugar molecules (called glucose).
What this means is that all the carb foods you can eat – like pasta, bread, vegetables or fruits – will be broken down inside the body to create glucose.
Glucose is the body’s primary source of energy and your brain and muscles need most of it.
But if carbs are so important, why should you limit your intake of them?
Proponents of a low carb diet will usually refer to one of three reasons:

1. Carbs aren’t essential for the body
First of all, even though carbs are usually the main source of energy for our body, they aren’t the only one. Our body can also create glucose using non-carbohydrate foods through a process called neoglucogenesis.
What this means is that you could theoretically survive without eating any carbs at all. If you still get enough protein and fat, your body will use these as sources for glucose.
2. Most junk food & candy is high in carbs
The second reason many people favor low carb diets is that even though there are healthy carbs like rice, potatoes or whole grains, most junk food is also made of it.
Pretty much all diet breaker foods like candy, soda or cookies are full of sugar and therefore carbs. Restricting your carb intake means you will automatically eat less junk food.
3. Carbs trigger the release of insulin
The third and most popular argument has to do with insulin, which is often seen as the main culprit for fat gain. Insulin is a hormone that helps bring nutrients into cells by “telling” the cells to open up and absorb them. Think of it as a key to storage cells.
The thing that so many people are worried about is that insulin also tells the cell to stop burning fat and store it instead. And since carbs cause a pretty big spike in insulin levels, they think that losing fat on a high carb diet is more difficult. More on why this is false later.

Does that mean a low carb diet is the way to go?

Not so fast. Let’s first talk about why the three main arguments for a low carb diet are either false or taken out of context.
In regards to actual carbohydrate needs, even though it is true that carbs are non-essential for survival, they are vital for optimal sports performance.
During high-intensity activities (such as weight training or sprinting), your body needs glucose as energy and its most efficient glucose source are carbs.
If glycogen levels are low, hard workouts become increasingly difficult to complete and your performance will suffer. This, in turn, will mean you will have a harder time in your training and build less muscle.
Next, let’s talk about the role of insulin in weight loss.
Even though insulin does trigger the storage of body fat, it’s not the underlying cause of obesity.
Why?
Because unless you provide your body with more energy (in the form of calories) than it needs you can eat as many carbs as you want. Without a calorie surplus there won’t be any energy for the insulin to store.
What’s even more interesting is that dietary protein also triggers an insulin response so even if you ate not carbs whatsoever you will still see a rise in insulin after high protein meals.
The bottom line is that insulin isn’t the problem, overeating is. You can get fat by eating too much protein, carbs or fat.

If most arguments for low carb aren’t true, why is the diet so successful?

This is where we get to the interesting part of this post. Even though all the major arguments low carb proponents make are not as valid as they seem at first, the diet as a whole is pretty effective.
After all, there are various studies showing that people lose more weight on a low carb diet than on a high carb diet.
How is that possible?
It’s actually pretty simple. It’s not that low carb is inherently better than other diet approaches. It just has a few side effects many people like. For example:
– It makes you lose weight fast. 1 gram of glycogen is stored with 3 grams of water, meaning that if you stop eating carbs and deplete your glycogen stores you will lose much of this water.
This happens during the first few days of going low carb, which is why many people are amazed at the quick results. But keep in mind that this weight loss is not fat but mostly water.
– The diet also eliminates most junk and diet breaker foods from your diet. Going low carb means you cannot eat a lot of chocolate or croissants before hitting your total daily carb intake.
This is especially helpful for people who have problems with hunger cravings and cannot control themselves once they had just a tiny bit of sugar.
– Eating less junk food also means you indirectly create a calorie deficit. Even if you aren’t tracking your calories, less sugary foods almost always lead to you consuming fewer calories.
Many beginners believe that the low carb diet itself is the cause of the weight loss when in fact it’s the lower calorie intake.
– Another important aspect is protein. You have to compensate for the lack of carbohydrate-rich foods somehow, which most people will do with a higher protein intake.
If your protein intake was low before, bringing it up to ideal levels will definitely mean you’ll lose more fat and less muscle. But again this effect could also be achieved on a high carb diet as long as you kept your protein intake constant.

My verdict on low-carb diets

To be honest I’m not a big fan of them and I believe they are overhyped. But that doesn’t mean they are worthless. People who are obese and/or don’t exercise usually benefit from them, because they don’t need the training fuel. Low carb diets also help with low insulin sensitivity, which tends to go hand in hand with obesity.
That said, most athletes and fitness-oriented folks will do better on a high-carb, low-fat or a medium-carb, medium-fat diet (along with a high protein intake in both cases).
These will give you more energy for your workouts and help with hunger control. Of course, you always want to stick to quality carbs like whole grains, vegetables and fruits instead of processed junk food.
For everyone else, it’s really a question of taste and preference. Research has shown there’s little difference in metabolic rate, weight loss, or fat loss when people are put on tightly-controlled low carb or higher-carb diets, so go with what you like best.
See how your body reacts to high and low carb intakes and afterwards adapt your diet while keeping your protein intake high. Nutrition is always highly individual, but if you follow these steps you will see results pretty quickly.

Do Negative Calorie Foods Exist & Can They Help You Lose Weight?